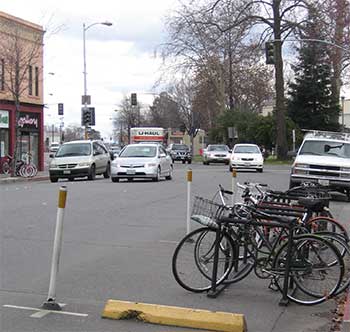 Creation of this CAP is called for by 2030 General Plan Goal SUS-6 (requiring reduction of citywide GHG emissions), and the implementation of this goal will rely on many other goals, policies, and actions throughout the General Plan.

The CAP does not change the level of development activity for Chico anticipated in the General Plan EIR. The actions in the CAP, in most cases, mirror adopted General Plan policies calling for energy efficiency, water conservation, waste minimization and diversion, reduction of vehicle miles traveled, and preservation of open space and sensitive habitat. As such, many of the potential effects of implementing the CAP were covered broadly by the General Plan EIR.

As discussed in the Climate Change Regulations section above, Senate Bill 97 established that GHG emissions and their effects are appropriate subjects for analysis under the California Environmental Quality Act (CEQA). One of the primary goals of the CAP, therefore, is to establish it as a qualified GHG emissions reduction plan for which future projects within the City can tier off of, thereby streamlining the environmental analysis necessary for CEQA.

SB 226, adopted in 2011, states that a project’s greenhouse gas emissions shall not, in and of themselves, be deemed to cause an exemption to be inapplicable if the project complies with all applicable regulations or requirements adopted to implement statewide, regional, or local plans consistent with Section 15183.5(b)(1)A-G of Title 14 of the California Code of Regulations. This section of the Regulations was amended in March 2010 to state that a GHG Reduction Plan, or Climate Action Plan, may be used for tiering and streamlining the analysis of GHG emissions in subsequent CEQA project evaluation provided that the CAP does the following:

A GHG reduction plan, such as the CAP, which meets the above criteria may be used in the environmental impact analysis for individual projects and may be the basis for a determination that a project’s incremental contribution to the cumulative effect of GHG emissions is not significant if the project complies with the requirements of the CAP. The environmental documents for later projects that rely on a cumulative analysis of a GHG reduction plan must identify those requirements specified in the CAP that apply to the project and, if they are not otherwise binding and enforceable, must incorporate them as mitigation measures. An Environmental Impact Report (EIR) may still be required for a project even though it does comply with the CAP if there is substantial evidence that the particular project may have cumulatively significant impacts (14CCR 15183.5).