Implications of Climate Change for California 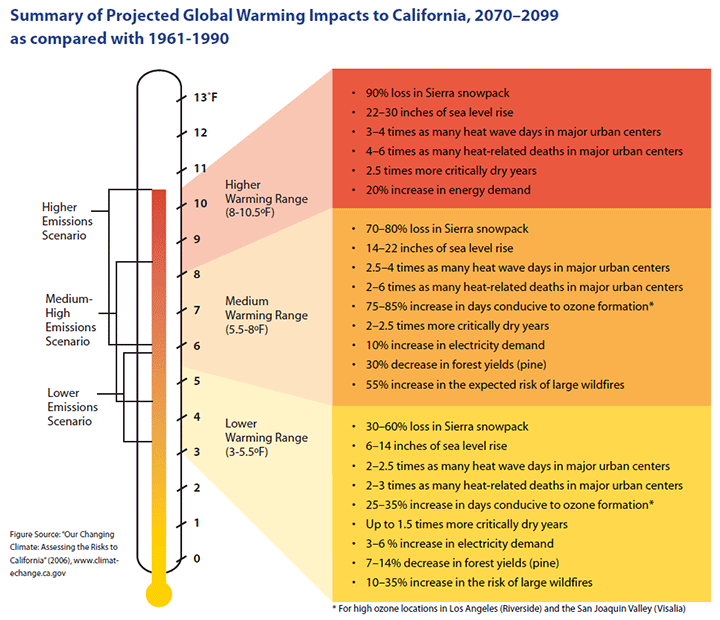 The State of California developed a plan for adapting to potential impacts of climate change entitled, “2009 California Climate Adaptation Strategy.”

The Plan identified the potential impacts of climate change in California with collaboration from the California Air Resources Board, California Department of Water Resources, California Environmental Protection Agency, California Energy Commission, and the Union of Concerned Scientists. The broad-ranging impacts identified have the potential to negatively affect agriculture, forestry, water resources, coastal areas, energy production, air quality, public infrastructure, sensitive species and habitats, public health and safety, and, as a result, multiple economic sectors throughout the state. The potential impacts will not occur evenly throughout the state. Those most likely to affect the local region are described below. The City’s efforts to prepare for adaptation to these impacts are discussed later in this chapter.

The Plan identified the potential impacts of climate change in California with collaboration from the California Air Resources Board, California Department of Water Resources, California Environmental Protection Agency, California Energy Commission, and the Union of Concerned Scientists. The broad-ranging impacts identified have the potential to negatively affect agriculture, forestry, water resources, coastal areas, energy production, air quality, public infrastructure, sensitive species and habitats, public health and safety, and, as a result, multiple economic sectors throughout the state. The potential impacts will not occur evenly throughout the state. Those most likely to affect the local region are described below. The City’s efforts to prepare for adaptation to these impacts are discussed later in this chapter.

Climate change could affect Californians’ health by intensifying heat waves, exacerbating air pollution, and expanding the range of infectious diseases. The primary concern is not as much a change in average climate but the projected increase in extreme conditions, such as extreme heat, which pose the most serious health risks. Californians would face greater risks of dehydration, heat stroke, heat exhaustion, heart attack, stroke, and respiratory distress with exposure to extreme heat. The elderly, children, people who are already ill, and the poor, who may lack access to air conditioning and medical assistance, are the most vulnerable to the effects of extreme heat. Warmer temperatures, when combined with increased precipitation, also can encourage mosquitobreeding, thereby increasing the risk of exposure to diseases carried by mosquitoes, such as the West Nile Virus. 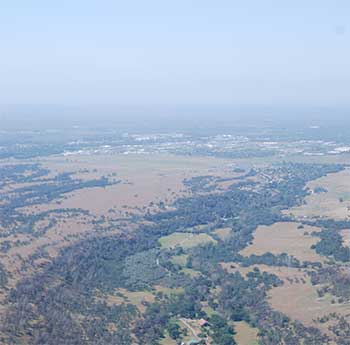 Higher temperatures are expected to increase the frequency, duration, and intensity of conditions that are conducive to the formation of unhealthy air pollution: ozone and particulate matter (O3, PM10, and PM2.5). An increase in air pollutants can cause or aggravate a wide range of health problems, including asthma, other acute respiratory diseases, cardiovascular diseases, and decreased lung capacity for the elderly and children. In California, more than 90% of the population is living in areas that already violate the state’s air quality standards, and Butte County has been designated as an area that does not meet the State and Federal standards for ozone and fine particulate matter (PM 2.5).

In hot weather, air pollution also worsens due to increases in natural hydrocarbon emissions and evaporative emissions of fuels and solvents. The greater number of wildfires predicted to accompany climate change will also contribute to higher levels of fine particulate matter in the air, which significantly impacts human health, natural ecosystems, and indirectly, the economy. 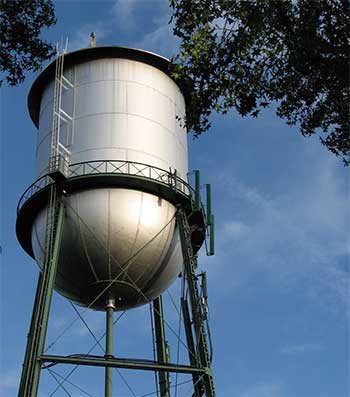 California already faces challenges in providing water for its large and growing population. Climate change is predicted to exacerbate these challenges through increased temperatures, and possibly, changes in precipitation patterns. The California Natural Resources Agency anticipates that the variability in hydrologic trends experienced during the last century will likely intensify this century. While most climate models project relatively moderate changes in precipitation over this century, rising global temperatures are expected to result in reductions in snowpack for the Sierra Nevada, with precipitation changing from snow to rain. The Sierra Nevada snowpack acts as natural water storage by holding winter precipitation and releasing it as snow melt during the spring and early summer months. Reductions of the winter snowpack would result in water storage shortages, while an increased proportion of precipitation in the form of rain, together with larger storms, would mean more frequent severe flood events.

With California’s unpredictable patterns of rain and snowfall, elaborate systems of dams and reservoirs keep a steady supply of water available and handle flood control. As snow and rain patterns shift, it becomes increasingly difficult to know when to keep reservoirs full and when to allow them to empty and make space for flood control. In addition, diminished stream flows will reduce groundwater recharge and surface water supplies. These impacts on surface and groundwater supplies would affect California’s farms, municipalities, ecosystems, and the generation of hydro-electric power. 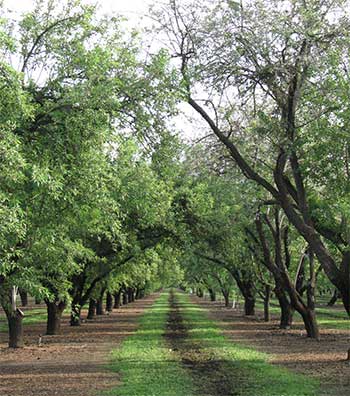 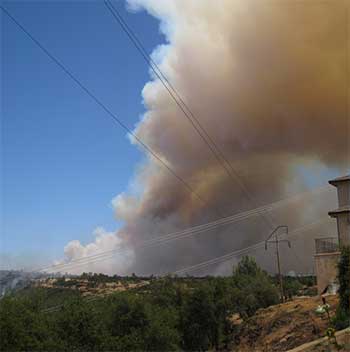 Extended periods of heat and drought make forests particularly susceptible to pests and diseases that could compromise forest health. Extended periods of heat and drought also may compromise a forest’s ability to provide habitat, protect the watershed from erosion and excess runoff, and store carbon. Climate models suggest that the factors contributing to catastrophic fire risk (fuel loads, high temperatures, dry conditions, wind, etc.) may be more prevalent under future climate conditions, likely leading to increases in the number and severity of wildfires. The California Regional Assessment Group in its 2002 report “Preparing for a Changing Climate -The Potential Consequences of Climate Variability and Change” already noted an increase in the number and extent of areas burned by wildfires in recent years. Larger and more frequent wildfires will impact California’s economy by increasing costs for fire suppression, interagency emergency response, post-fire recovery efforts, and expenses for replacing structures, timberlands, water supplies, and lost tourism and recreation opportunities.

Predicted increases in temperature and changes in precipitation patterns would likely shift California’s current vegetation and habitat zones northward by approximately 100 to 400 miles, as well as upwards in elevation by 500 to 1,500 feet. The distribution, abundance, and vitality of species and their habitats strongly depend on climatic and microclimatic conditions. Changes in these conditions, particularly decreased groundwater supply, would affect those plant and aquatic species that live and depend on shallow aquifers. Changes in climatic conditions could also necessitate the geographic movement of species in accordance with the predicted shifts in habitats, making native plant habitats vulnerable to invasive species, and could present problems for many species that are unable to migrate. 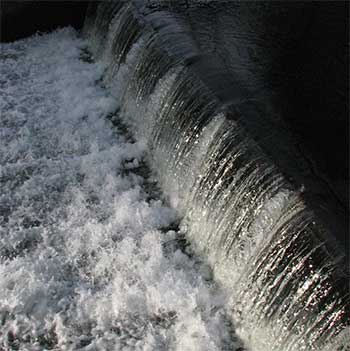 Potential hydrological changes associated with global climate change could influence the aquatic life in California, with particularly negative effects on cold-water fish. For example, according to the Department of Water Resources, if climate change raises air temperature by just a few degrees Celsius, water temperatures could rise above the tolerance of salmon and trout in many streams, and result in an environment favorable to non-native fish such as sunfish and carp. Rises in summer temperatures would be particularly problematic for many of the threatened and endangered fish that spend summers in cold-water streams, but could also threaten and endanger fish that are currently in plentiful supply. Economic Impacts

The same impacts from climate change that threaten our physical environment also have economic implications. Industries that are directly dependent on natural systems, such as forestry, fishing, and agriculture, would be compromised by climate change if their product or product’s habitat were impacted by environmental changes. Other businesses and economic sectors would be indirectly impacted by climate change through associated costs such as preparing for or responding to natural events such as flooding, extreme weather, challenges to water supplies, reduced hydro-electric power, increased food and lumber costs, and threats to public health.