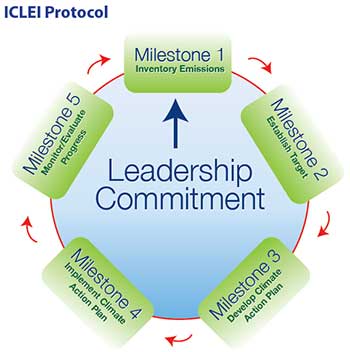 In 2008, the City of Chico, with the assistance of the California State University Chico Research Foundation, completed an inventory of the GHG emissions generated by both the City as an organization and the Chico community (GHG Inventory). The International Council for Local Environmental Initiatives (ICLEI) provides a fivemilestone framework for reducing GHG emissions and addressing climate change (Figure 1.2) that served as a model for development of the GHG Inventory and the CAP.

The data collection and analysis for the GHG Inventory was conducted using ICLEI’s Clean Air and Climate Protection, Version 1 (CACP) software and methodology. The CACP software allowed tracking and quantification of GHG emissions generated from electricity and natural gas consumption, vehicle miles traveled, and solid waste tonnages from both the City of Chico and the community during one year. The inventory measured emissions generated in the year 2005, making it the baseline year from which to measure emissions reductions. The inventory additionally allows the City to track and compare emissions with other California cities that use the same baseline year, as many do.

The GHG inventory also projected emissions levels for the year 2020 in the five sectors of the Inventory: solid waste, transportation, and residential, commercial, and industrial energy use. Since this projection assumed that all emissions-producing activities would continue at their 2005 rates with no actions taken to reduce emissions, it is called the Business as Usual (BAU) emissions scenario.

The growth rates used in the BAU scenario were derived from multiple-year data measuring annual increases in population, residential and commercial growth, waste tonnage, and use of gasoline, diesel, natural gas, and electricity. The combined average growth rates for the five sectors was just over 2% per year, which is consistent with the historical trend of approximately 2% annual population growth for Chico. As shown in Figure 1.4 below, the BAU scenario projects that emissions from the Chico area will increase beyond the baseline to 695,504 MtCO2e for the year 2020 if no reductions are made to emissions rates. (For further details on the BAU scenario, see Appendix B.) 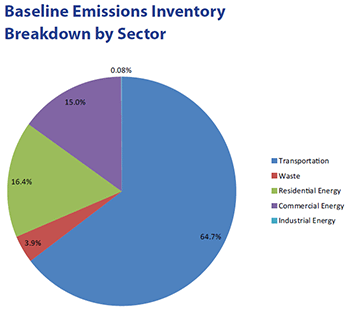 Although AB 32 does not does not require that municipalities reduce current GHG emissions by 15%, the Scoping Plan sees local governments as “essential partners” in achieving this target. For the purposes of establishing a GHG emissions reduction target to meet the AB 32 requirements, the City is considering “current” emissions as the GHG emissions level identified in the inventory base year of 2005.

In 2008, the City Council established an overall GHGreduction goal of 25% below 2005 base-year emissions levels to be achieved by December 2020. This target level is roughly equivalent to the Kyoto Protocol goal, and exceeds the 15% reduction goal of AB 32. Using the GHG inventory, this target emissions level was calculated to be 385,749 MtCO2e generated in the year 2020. The BAU scenario described above shows that achieving the GHG emission reductions target of a 25% reduction from 2005 levels equates to a 44.5% reduction from the BAU scenario projected emissions for 2020. 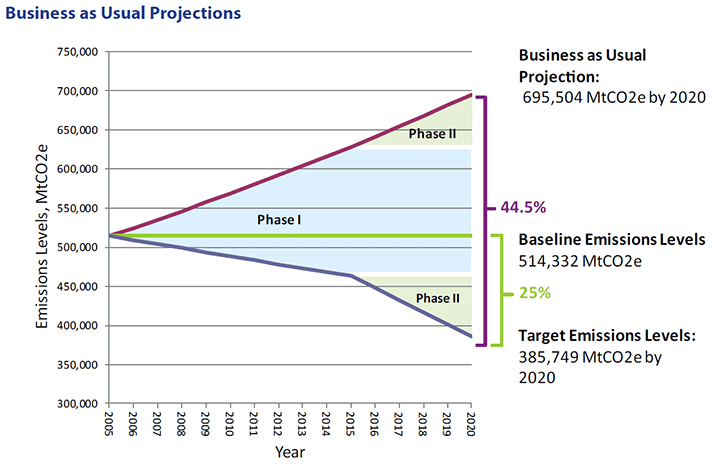