To understand global climate change, it is important to recognize the naturally occurring “greenhouse effect” and to define the greenhouse gases (GHGs) that contribute to this phenomenon. Parts of the Earth’s atmosphere act as an insulating blanket of just the right thickness to trap sufficient solar energy to keep the global average temperature in a suitable range. The “blanket” is a collection of atmospheric gases called “greenhouse gases,” that trap heat like the glass walls of a greenhouse. These GHG, consist mainly of water vapor, carbon dioxide (CO2), methane (CH4), nitrous oxide (N2O), ozone (O3), and chlorofluorocarbons (CFCs), and all act as effective global insulators, reflecting back to earth infrared radiation, as demonstrated in Figure 1.1. Carbon dioxide is an example of a greenhouse gas that is emitted to the atmosphere both naturally, through the Earth’s carbon cycle, and through human activities, such as the burning of fossil fuels (natural gas, coal, gasoline, etc.) or cement production. Other greenhouse gases, fluorinated gases for example, are created and emitted solely through human activities.

Over the past century, humans have contributed to the amount of GHGs in the atmosphere by activities such as burning fossil fuels to power cars, factories, and utilities. The gases produced from these activities, primarily carbon dioxide and methane, are enhancing the natural greenhouse effect and likely contributing to an increase in global average temperature and related climate changes. (sources: https://www.climate.gov/climate-and-energy-topics/causes-climate-change).

Because GHGs have variable potencies, a common metric of carbon dioxide equivalents (CO2e) is used to report a combined potency from all GHGs. The potency of each GHG is measured as a combination of the volume of its emissions and its global warming potential (U.S. EPA), and is expressed as a function of the potency with respect to the same mass of CO2. Thus, by multiplying the individual gas volume by its global warming potential, the emissions of each individual gas can be measured in terms of metric tons of carbon dioxide equivalent emissions (MtCO2e). 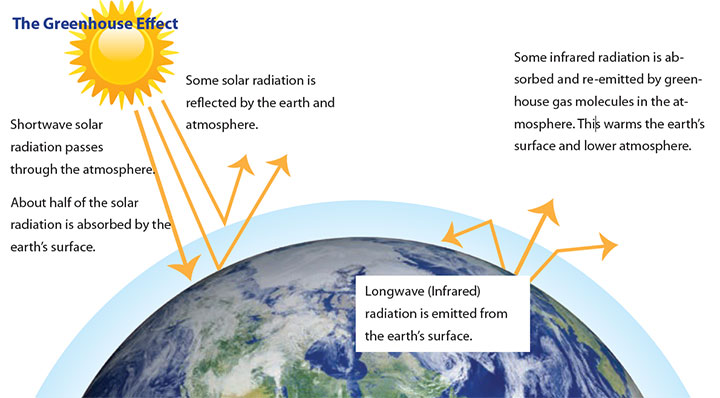